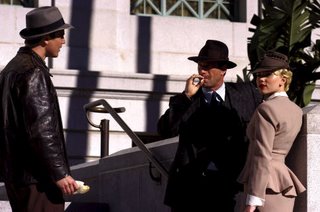 The script is based on an excellent book of Elroy which is considered a classic of the detective series. The director B. De Palma seemed ideal for realizing this project. His long admiration of Hitchcock and his career on mystery film create the impression that the project would be well executed. After all these facts one can only wonder what went wrong.

Every time a book is transferred into screen there is a great risk. Will the film be a able to concise the usually extended plot of the book maintaining the important parts and keeping the necessary coherence? Will it manage to transfer the atmosphere of the book? The more known and loved the book the greater the risk. In Black Dahlia’s case the film ended up with no atmosphere and no twists and turns in the plot that would have made the film interested. Everything was flat. The murder story was no sensational. The love story wasn’t believable. The sexual story wasn’t intriguing. Even worse De Palma’s directing never leaves the boundaries of convention. Where are the pictures that were so perfectly though and planned that became fetish for his funs. Where are the shoots that imitated Hitchcock’s cunning? A complete disappointment. A good opportunity for a sensational film has gone into the drain. In other word read the book and make your own film in your own mind.

Thank you for Smoking! : a satyrical comedy, fun enough not mean enough 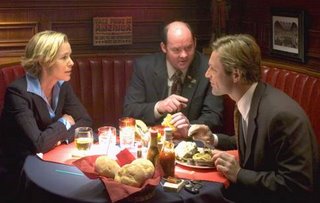 The Thank you For Smoking is a good comedy but a light a satyr. The story is about the spokesman of the tobacco industry in . In the modern society of that smoking is not politically correct anymore. One man (most hated) is responsible for the public relationships of the tobacco companies. His job is to think fast and talk even faster. Most people hate him for what he does for a living and consider him nothing more than a murderer. On the other hand he says that all people know that cigarettes are bad for their health but they are entitled to choose fro themselves whether they want to smoke or not.
The film and the situations are represented with humour. The film has a good pace keeping you always interested and alert. The actors are great in their part and the filming is well done. Still there is something missing. A little more irony would be welcome. The film makes an effort to depictt the hysteria that hangs over about what is right and healthy and as usually they are going overboard. The comments remain relatively innocent lacking the acid that would make them even more deliciously clever and hilarious. As I said before the pace of the script was fast. In some cases too fast as it doesn’t take fully advantage some of the cleverest ideas of the film. For example our hero gets kidnapped and is filled with nicotine patches. His doctor informs him that being a smoker has saved his life, but he can’t smoke even one more cigarette because he has taken an overdose of nicotine and he will die. From there and one we never see the hero struggling to cut down cigarette. The point is lost in the current of the film.

Eventually I would say that Thank you for Smoking is easily watched and well enjoyed but remains superficial since it lacks the cutting edge that would turn into a classic.

There are many reasons to go and see a film. And then again there are equally many to no to. Sometimes you go in order no to stay at home, or in order to to see your friends. Other time you go because the film is advertised a lot and you want to have an opinion of your own and so on. But when do you to cinema for the "right reasons"? Healthy-eaters say: you are what you eat. For me you are what you see (listen and read). If you eat junk food you will eventually get unhealthy. If you see junk you will eventually get stupid. The problem is that in your house on tv the options are limited. You are force fed junk. So when you go to cinema you make an active choice and finally you can choose something good for yourself. On other hand people have cravings for junk.
So I went to see Miami Vice. My friend wanted to see it since he felt a bit nostalgic for the old tv series and well i accompanied him. The film iamges are well thought and executed. In other words it has style. The film starts with a question: who informs the bad guys about the undercover works of the fbi. Usually when a question is made in the beginning of the film, the narration has to give answers in order for the film to be concluded. In Miami Vice case though, after all that style and a little bit of action and love story in the mix the question remains open. we never find out who is the snitch. There are two possiblities. In the first case they forgot about it. I mean who would notice that the film wasnt finished! then again maybe they are already planning a part two. Anyway the whole film was ridiculus. It had no real script. In the end i felt rather disapointed and deceived.
Next time no junk food for me it gives belly ache.
Αναρτήθηκε από Helen Tragea \ Ελένη Τραγέα στις 2:29 PM No comments: