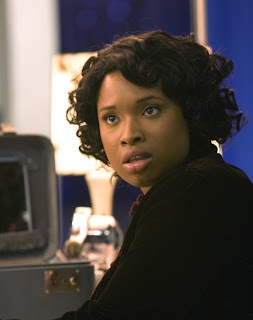 The success of the Moulin Rouge some years ago gave new life to a forgotten genre. As a result, musical is back. Chicago impressed spectators with its intricate dancing numbers and its excellent music and singing. In the Dreamgirls case the musical has limited itself to music and signing. The songs and the voices are beautiful but the dancing numbers are missing. In the musical genre most of the spectators’ enjoyment derives from the harmony of the movement of the dancer and the rhythm of the editing. In Dreamagirls case there is no dancing to act as the optical equivalent to the beautiful singing. Sometimes, therefore, the spectator gets bored waiting for the singing to finish and the myth to progress.
Dreamgirls is based on a true story. It describes with no flattering way the begging of the career of Diana Ross. The Deramgirls, a black female group, has as lead voice a rather fat girl. She is deeply in love with the manager. When the group tries to become famous, the manager puts in the lead a second class voice which belongs to a beautiful girl. Eventually he leaves his first love and marries the pretty girl. It is a history of total betrayal. The protagonist is betrayed and left aside by her lover, by her best friend and by her brother. The pretty girl is in fact Dianna Ross. The script is quite good. It has its peaks and anxiety and depicts rather well the intricacies of the music business and the era. The soundtrack is quite successful mostly due to the exquisite voice of Jennifer Hudson. She proves much more talented than the famous singer Beyoncé Knowles. Still too much singing even in scenes where is not really needed has made in some points this movies boring and slow.
Dreamgilrs is a movie that could have been special. Good story with a well made script. Good actors and moreover great voices. Still it didn’t make it. I think that the producers were carried away by their discovery of a new talented voice and actress. They wanted to exploit and impress the audience by their discovery. As a result they created too many scenes with singing. The editing is too loose and the film at places has no rhythm. A much stricter editing would really lift this movie off the ground. Still for those who love the music of the era, there is the soundtrack as a consolation price.
Αναρτήθηκε από Helen Tragea \ Ελένη Τραγέα στις 1:43 PM No comments:

The labyrinth of Pana: a cruel fairy tale 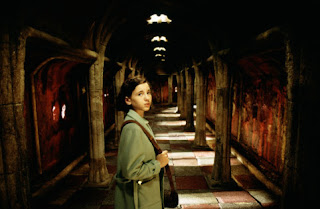 My expectations for this film had risen high since I had seen the trailer and heard the rumors and the reviews. Everyone has a kind of film that he/ she prefers. I always liked the dark fantasy films that resemble to children’s nightmares. Strong gripping images and mysterious atmosphere. That’s my kind of think. Films like The City of Lost Children, Delicatessen, Dark City and of course David Lynch’s films. From the trailer I built up an appetite for a film that would become part of my list of film-fetish. The labyrinth of Pana came close to become one of my beloved films but eventually it didn’t make it.
Let’s however, see at this film in the right perspective. The director Guillermo del Toro has no great achievement to present from his film past. The fact that he has written a film like The labyrinth of Pana after film like Hellboy and Blade II is in itself a very pleasant surprise. From his previous films one could find the elements of a strong and rich ability to built gripping images. The labyrinth of Pana, however, is a film that has more to offer than the gripping images. It has meaning.
During the Spanish Civil War a small girl if forced to deal with her new stepfather, an almost paranoid fascist. Her pregnant mother moves into his house in the country. As soon as she gets there she fells ill and dies during giving birth to a son. The worse the situation gets with her mother the more the child escapes into her fantastic world. In this world she is a princess of the underground world. She has to pass three difficult tests in order to be able to return at her kingdom and at her father. The Pana guides her through her ordeals and tests. But does he say the truth, does he guide her to her rightful place or he prepares to trap her? The full power and extend of a child fantasy is presented in great images. On the other hand at full contrast we become witnesses to the battles between the fascists and the rebellions. As more and more people are tortured and killed the child fantasies also become more dangerous, dark and violent. Her ability to escape the cruel reality to a dream world withers and she ends up trapped in a world equally cruel and frightening. In the end she manages to do her last leap into a dream fantasy by achieving her end and becoming a princess reunited with her father and mother in the world of the dead. In this way she dies with a smile.
The contrast between the cruel reality and the nightmarish fantasies of the child is always sharp and hard. The spectator can feel the violence of the real world seeping into the fantasy world and contaminating it. One can not relax during this film can not find relief even in the world of Pana. He has to stay on the edge and be prepared fro the extremely raw images that attack him. I am a well accustomed viewer of thrillers and splatters and still couldn’t handle the gore. Actually most of its violence is insinuated and little is actually demonstrated. Still most spectators would say that this film is extremely harsh.
The labyrinth of Pana has a lot to offer: An atmosphere with intense images. A good, original script with meaning. It is truly a good film even if doesn’t manage to become an excellent film. Something very small and fine is missing. It might be that the good atmosphere sometimes rises for small delicate details of an almost naturalistic world. Here the fantasy scene might have been a little too extravagant. Unfortunately the fantasy and the real world are too well divided and distinctive. I would prefer it if for a moment or two the spectator couldn’t understand in he/she was in the fantasy world or in the reality. The feeling of disorientation he would have in this case would probably add a lot to the atmosphere of the picture. It might have been the all too conventional end with the little girl eventually becoming the princess of a too beautiful world. Sometimes you can’t really put your finger on to what is lacking in order to transform a good picture into a filmic legend. Still The labyrinth of Pana has offered me images that stayed with me and that’s always a good sign. Maybe Guillermo del Toro will do better next time I have high hopes for him!
Αναρτήθηκε από Helen Tragea \ Ελένη Τραγέα στις 2:33 PM 1 comment:

The Perfume: The Story of a Murderer, an honest effort to do justice to the book but nothing more 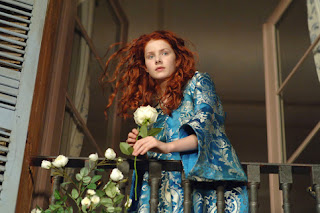 Every film that is based on a popular book takes a big risk. The ones that have already read the book will judge the film severely. They will compare it no only to the text of the book but to the fantasy images they formed themselves while they read it. Therefore the film is already popular the moment it comes out taking advantage of the fame of the book. On the other hand it is forced to meet all the preconceptions of the readers.
Before commenting on the film I have to confess that I have read the book. It’s been years since I read it but I can still remember the big impression it had on me. While reading I could feel a slight perfume drifting on the air. Under these circumstances I would say that I am not the most suitable person to comment on this film. In the first place I wasn ’t very sure that I even wanted to watch it. I was afraid that it might destroy my memories from the book. The film however managed to win me over at least at some extend. Adequately faithful to the book the film manages to present all the key elements of the plot. The script is coherent enough with suspense and the proper peaks of anxiety. Why though, a script that has been so close to the book creates a completely new scene in the end of the film? Why is the somewhat provocative scene of the orgy needed? Is it there just for the provocation? Or they need it in order to create a peak right after the break according to the classical Hollywood narrative style? In any case I think that the scene is redundant. Another thing that it bothers me in the script is that the fact that the hero doesn ’t have any personal smell is only insinuated and not emphasized as it should have been. The
lack of personal smell is very important in the book as it is one of the main motives of the hero’s effort to create the perfect perfume. The perfume he creates will supplement his own smell giving him the opportunity not only to just fit in the world ( he has always been an outcast) but also to take his revenge on the society that has rejected him. by creating the perfct perfume he can be anything he wants, king or even a god. In the film the personal smell of the girls is a symbol of their beauty, youth and potential. The murderer kills them in order to find a way to preserve all that beauty,freshness and potential. If any of those young women aged their beauty
would wither and fade away. As a result, the film remains faithful to the
facts of the book. But it has a different interpretation of the facts that are presented.
Aesthetically, the detailed images with the rich colors convey convincingly enough the sense of smell. The powerful warm colors of the province make the spectator almost feel the luscious perfumes of the nature and the murdered girls. It is a film that achieves to be almost as sensual as it the book.
In the end though Perfume remains a mediocre film. It doesn’t insult your ntelligence. It tries to convey the unique atmosphere of the book but it doesn’t manage to add something, its own characteristic smell to the myth. It is an honest effort but nothing more. After all these perfumes and colors it remains rather odorless and colorless.

PS
It has
taken me long time to post something new at my blog. I am sorry. Both
my work and my studies have taken most of my time. I have seen plenty
of movies during this time and i am determined to do some catching up
at the blog so .....stay tuned!
Αναρτήθηκε από Helen Tragea \ Ελένη Τραγέα στις 3:47 PM No comments: